This post is also available in: Portuguese (Brazil), Bahasa Sug

(Modern women, in search of beauty, cut their hair according to the latest fashions and visit hair salons, spending obscene amounts of money doing up their hair. Having spent so much time and effort to make their hair look attractive, they discard the headscarf from their wardrobe, so as to show off their ‘beauty’. In this Suhbah Maulana addresses this disease that has afflicted Muslim women of this century)

O Wives of the Prophet! You are not like any of the (other) women: if you do fear (Allah), be not too complaisant of speech, lest one in whose heart is a disease should be moved with desire: but speak you a speech (that is) just. (32)ÝAnd stay quietly in your houses, and make not a dazzling display, like that of the first Times of Ignorance; and establish regular Prayer, and give regular Charity; and obey Allah and His Messenger. And Allah only wishes to remove all abomination from you, ye Members of the Family, and to make you pure and spotless. (Surah Al-Ahzab 33:32-33)

Their ways are unclean! How can an unclean way lead to a clean destination, Paradise? When Sayyidina Adam became unclean from one sin, he was ejected from Paradise! So follow a clean, blessed way, the Ways of the guided ones (Prophets and Saints) to reach eternal happiness! But if you choose to defy, Allah is not in need of your worship or obedience.

There was indeed in them (the Prophets) an excellent example for you to followÝ- for those whose hope is in Allah and in the Last Day. But if any turn away, truly Allah is Free of all Wants, Worthy of all Praise. (Surah Al-Mumtahinah 60:6)

It is not permitted to the Sun to catch up the Moon, nor can the Night outstrip the Day: each (just) swims along in (its own) orbit (according to Law). (Surah Ya-Sin 36:40)

The Sun and Moon each have their own orbits, each has its own unique journey and role, each has been equipped for that specific Divine duty that it has been created for. Similarly, men and women have been created and equipped differently and uniquely for their respective duties. Just as the Sun cannot do what the Moon does or vice-versa (the Solar System would be in chaos if they tried to switch places), men and women must follow the Divine roles they have been designed for. Once they try to move outside their ordained ‘orbits’, chaos will descend upon their lives, as we are seeing right before our eyes, today.

Men are the protectors and maintainers of women (Surah An-Nisa 4:34) 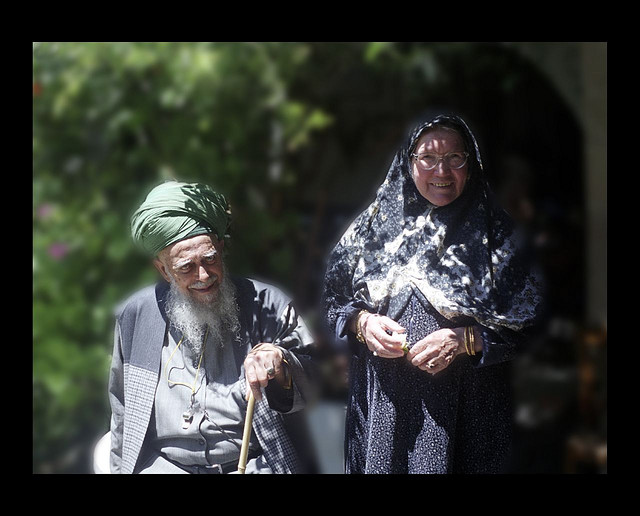 Maulana Shaykh Nazim and his late wife, Hajjah Aminah Adil. He had described his life with her as blissful, for the lives of those who live to please Allah, are made pleasing by Allah. Al-Fatihah.

This 12 minute Snippet in Turkish, can be only be watched at www.Saltanat.org, choose from the menu on the right, ‘Nasihat 30.Oct 2010’. There is a CC button next to the Volume control at the bottom of the screen to choose choose subtitles in eight languages, choose from Arabic, Bahasa Indonesia/Melayu, German, English, Spanish, Italian, Russian and Turkish. During Live Suhbahs, the buttons at the top provide Live Audio Translations into other languages.ÝNo other site carries this video. Saltanat TV is the Official Site of Maulana Shaykh Nazim that is sanctioned and approved by him personally.