A Tale of two Drops of Water

We made from water every living thing. (Surah Al-Anbiya 21:30)

Couldst thou but see when the guilty hang their heads before their Lord, (and say): Our Lord! We have now seen and heard, so send us back; we will do right, now we are sure. (Surah As-Sajdah 32:12) 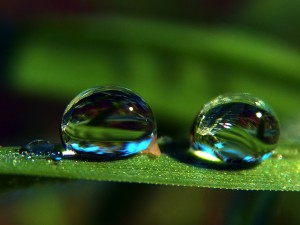 Whoso obeyeth Allah and the messenger, they are with those unto whom Allah hath shown favour, of the prophets and the saints and the martyrs and the righteous. The best of company are they! (Surah An-Nisa 4:69)

And remember that Abraham was tried by his Lord with certain commands, which he fulfilled; He said: “I will make thee an Imam to the nations.” He pleaded: “And also (Imams) from my offspring!” He answered: “But my promise is not within the reach of evil-doers.” (124) Remember We made the House a place of assembly for men and a place of safety; and take ye the station of Abraham as a place of prayer; and We covenanted with Abraham and Isma`il that they should sanctify My House for those who compass it round or use it as a retreat or bow, or prostrate themselves (therein in prayer). (125) And remember Abraham said: “My Lord make this a City of Peace, and feed its people with fruits such of them as believe in Allah and the Last Day.” He said: “(Yea) and such as reject faith for a while will I grant them their pleasure, but will soon drive them to the torment of fire an evil destination (indeed)!” (126) (Surah Al-Baqarah 2:124-126)

After Sayyidina Ibrahim (as) was severely tested by Allah (he took the Way of Discipline), Allah raised him and his descendents as Imams (Guides, Knowers, Gnostics, Friends of Allah), and commanded him and Sayyidina Ismail (as) to ‘sanctify My House’, which means, ‘to teach mureeds the Way of Discipline, to clean their hearts of Ego, for the heart of Man is the House of God’. Sayyidina Ibrahim (as) prayed that Makkah be a City of Peace (mureeds who followed the Way would attain peace) and beseeched Allah to give those who believed in Allah and the Last Day, ‘fruits’. Despite Makkah lying smack in the middle of a desert, Sayyidina Ibrahim (as) did not ask for (tasteless) water, nor did he ask for (physical) food. Prophets are always seeking Spiritual nourishment for their Ummahs, and Sayyidina Ibrahim (as) prayed to Allah, that believers be given ‘fruits’ – symbolising a journey of taste, under the guidance of true Shaykhs, who had walked the journey themselves and attained the Secret.

A Scientific analysis of Maulana’s analogy

(This section is only for those who wish to see the beauty of Maulana’s analogy from a Scientific point of view. Many scientific terms are used, so please skip this section if you find biological analysis dry and uninteresting.)

Root pressure is the pressure of other water droplets that are also around it in the root. It is like a push-from-below force that helps the water droplet climb, like the effect of being in a jema’ah (congregation), hence Shah Naqshband’s (qs) saying that, ‘There is goodness in Association.’

Transpiration pull, on the other hand, is a force that is exerted by evaporating water from the top of the tall tree, it is a pulling force from the top, that is caused by the power of the Sun, which in this case is symbolises the Divine Pull, helping the Seeker to his goal. Indeed, ‘When a person takes one step to Allah, Allah takes ten steps towards him.’ (Hadees Qudsi).

There is no compulsion in religion. Maulana says, we are all free to choose our way, but remember – we must be prepared to live with the consequences of our decisions, forever. It takes a truly blind, foolish and short-sighted one to choose an eternal life of regret over an eternal life of sweet love. It’s your call – you decide which fate you prefer.

This 46 minute Suhbah in English can be viewed at www.Saltanat.org, Click here to watch the Suhbah. Click on Juma Sohbat 06 May 2011 (en). Should the video no longer be there, please look for it under the video archives of the Saltanat TV site.