Stunning Quranic solution to the situation in Egypt

The Quran’s stunning solution to the situation in Egypt

(When Maulana spoke on the 27th of October last year, of the impending fall of the Taghuts (tyrants/dictators), especially in the Muslim world, his Suhbah was greeted with a mixture of fear and scepticism. In later Suhbahs, he highlighted more than ten middle-eastern nations – who were more Arab than Muslim – who would face the Divine whip, for discarding obedience and piety, in place of Western culture and norms. True enough, the opening domino in this cascade has toppled – Tunisia is down, whilst Egypt, Yemen, Jordan, Sudan and other Arab states are heading for Divine chastisement. In this Suhbah, Maulana outlines the only way for a return of peace and tranquility in the region. This Suhbah contain life-saving and pertinent advice, not just for the Egyptians and Arabs, but for all of us.)

That is so because Allâh will never change a grace which He has bestowed on a people until they change what is in their ownselves. And verily, Allâh is All-Hearer, All-Knower. (Surah Al-Anfal 8:53)

Hence, Allah will not change the leadership for the better, until they (the citizens) change themselves likewise!

“Our Lord! We have wronged ourselves. If You forgive us not, and bestow not upon us Your Mercy, we shall certainly be of the losers.” (Surah Al-A'raf 7:23) 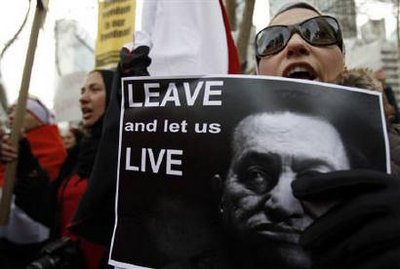 Those who avoid At-Tâghût (tyrants/dictators) by not helping them and turn to Allâh (in repentance), for them are glad tidings; so announce the good news to My slaves. (Surah Az-Zumar 39:17)

Whatever misfortune happens to you, is because of the things your hands have earned, and for many (of them) He grants forgiveness. (Surah Ash-Shura 42:30)

O ye who believe! Save yourselves and your families from a Fire whose fuel is Men and Stones, over which are (appointed) angels stern (and) severe who flinch not (from executing) the Commands they receive from Allah, but do (precisely) what they are commanded. (Surah At-Tahrim 66:6)

This Verse mentions to save ourselves first before we can advise and save others. The worst act, is to advise others, yet at the same time, neglect our own advice. It is mentioned in a Hadees, that some believers who are in Jannah, will see the one who advised them, in Jahannam. When asked, their once-advisor would say, “I taught others to do good, but I neglected my own advice.” It is mentioned in another Hadees, that the punishment on such a person would be so severe, that iblis, who has no pity in his heart, would almost begin to pity him. Allah says of such a person:

Most hateful it is with Allâh that you say that which you do not do. (Surah As-Saff 61:3)

And indeed We seized them with punishment, but they humbled not themselves to their Lord, nor did they invoke (Allâh) with submission to Him. (76) Until, when We open for them the gate of severe punishment, then lo! they will be plunged into destruction with deep regrets, sorrows and in despair. (77) (Quran 23:76-77)

The next two Summaries will contain more important advice for the Egyptians. And for us. 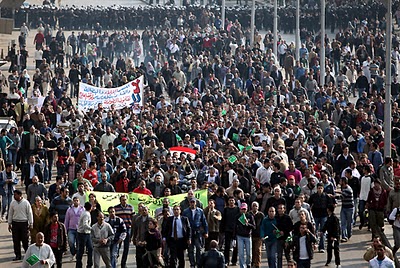 This twenty-six minute Suhbah, in Arabic can be viewed only at www.Saltanat.org, click on ‘A Good Ruler, 31 Jan 2011’ to watch it.There is a CC button next to the Volume control at the bottom of the screen to choose choose subtitles in eleven languages, choose from Arabic, Bahasa Indonesia/Melayu, German, English, Spanish, Italian, Russian, Mandarin, Dutch, Italian and Turkish. Click the AD button at the top right-hand corner of the display area, for a live translation into English. During Live Suhbahs, the buttons at the top provide Live Audio Translations into other languages as well. Should the video no longer be there, please look for it under the video archives of the Saltanat TV site.